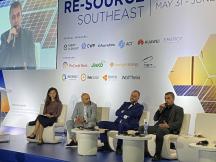 The best for each electricity system on the way of transformation is to have current capacities in order to be able to balance the transition and make it as effective as possible. This said Energy Minister Alexander Nikolov to participants in the Re-Source Southeast Hub Regional Platform. He stressed that the so-called green and brown energy should not be opposed because they cannot exist without each other. On the integrated EU markets, the transition cannot be made unless Europe carries out an adequate and planned policy in the sector. In a region with deficits such as South East Europe, the only balancing country that consistently exports electricity is Bulgaria, and the system functions in such a way that neighbouring countries are largely dependent on Bulgaria.

Let us not confuse decarbonization with phasing out capacities. Carbon emissions can be captured and used for different purposes and materials production. When part of the supply function is removed, this leads to higher prices, Alexander Nikolov underlined. Minister Nikolov also highlighted that Bulgaria is part of an open market and it is essential to see where electricity is consumed and not only how it has been produced. If they continue to point us, especially the Maritza Basin, as the polluter of Europe, let us not forget that carbon emissions do not have a passport. In a context of transformation, inflation and war in our vicinity, it is essential to get into the depth of these issues, as energy lays the basis for the entire economy and is vital for every person. Only if of all sectors are involved and we are united, the transition can be made effectively, Minister Nikolov highlighted.

In the Energy Minister’s opinion, currently Bulgaria, compared to other EU member-states, is the best destination for investment in RES capacities, taking into account the tax and social regime, initial costs of land purchase, procurement, delivery, etc. At the same time, there are higher revenues from the RES field in Bulgaria in comparison with other countries.

Minister Nikolov expressed regret that over the years very few people had appreciated our place on the renewables market and how effective it might be, and instead burdens were created. Let us look at this process in its entirety, since the construction of new capacities from the beginning leads to dependency on materials, supplies, etc. The difficult question is whether we want to replace a country like Russia with another, which is a producer of such materials.

Another complex issue is when the system starts balancing with new products like the so-called batteries, what happens with the residual product. It is to the benefit of no one to avoid difficult questions because they create challenges to technologies, the energy minister stated firmly.