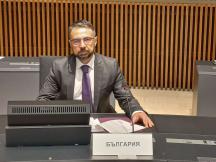 Bulgaria proposes to establish a temporary European framework for state aid for the current electricity price crisis, Energy Minister Andrey Zhivkov said at the meeting of the Transport, Telecommunications and Energy Council, part Energy, which took place in Luxembourg. EU energy ministers discussed the impact of rising energy prices and possible measures that can be taken at both European and national level in relation to the EC Communication "Tackling rising energy prices: a toolbox for action and support".

Our country supports the possibility of creating a European crisis fund to mobilize financial resources through the sale of additional greenhouse gas emission allowances released from the Market Stability Reserve, Minister Zhivkov stressed in his speech.

The delay in the growth of EU economies will have an additional burden on the Bulgarian economy given its strong connectivity with European markets, especially in sectors such as machinery, textile industry, electronics manufacturing, mining, construction, etc., Minister Zhivkov pointed out. The forthcoming winter season is expected to further exacerbate the situation, requiring additional national measures for adequate response and support mechanisms. Minister Zhivkov informed that, in addition to the other temporary measures already taken to increase transparency, improve the functioning of the energy market and to enhance regulatory control, Bulgaria plans to implement a provisional programme for compensation of non-household end customers between 1 October and 30 November 2021, with a total budget of approximately EUR 225 million.

With regard to the natural gas market, Minister Zhivkov said that the increase in market integration is a key condition for improving security of supply. By developing interconnections with neighbouring countries such as Greece and Serbia, the countries of Southeast and Central Europe will have access to alternative supplies from the Caspian region. The Energy Minister also highlighted other priority projects implemented by our country that are of benefit for the entire region of Southeast Europe: the expansion of the underground gas storage facility Chiren, Bulgaria’s participation in the LNG terminal near Alexandroupolis and others. According to Minister Zivkov, the expansion of UGS "Chiren" will add to the toolbox by providing further flexibility for gas transmission systems at European level.